Guilt is a feeling we usually encounter after doing anything bad or wrong, either intentionally or unintentionally.

Sometimes feeling of guilt isn’t bad all. It’s productive. Feeling guilty after doing a wrong deed can lead to good change, such as asking for forgiveness or an apology.

But feeling guilty on a thing that you have not done or happened unintentionally can have negative effects on your health and life. It can cause self-doubt, low self-esteem, and shame. Sometimes, it can be tough to overcome these feelings, especially if it’s the case of chronic guilt. That’s why treating guilt timely and wisely is essential.

People with unsettled guilt feel irritable. They are insecure or apologetic all the time. Guilt, if not treated timely can cause:

Below are some healthy ways to treat your guilt — try them and improve those negative feelings:

Understand the Purpose of Guilt

When you feel the very first wave of guilt, instead of passing it, try to understand what it's indicating. Most people feel guilty because of negative behavior and that's an indication to change your thoughts or at least work on them.

It's always better to treat your guilt positively rather than letting it go.

See If You're Measuring Yourself to Others Expectations

Before losing all of your confidence, take a moment to see if is well deserved or you're living on the other people's expectations.

If you are living as per the expectations of others, you shouldn't even feel guilty.

When we are feeling guilty, most of us lay it on thick. Sometimes it's deserving but mostly we overstate the situation. It’s not healthy at all, so instead reassess that the amount of guilt you're feeling is correct or not. Chances are that you might be overstating and don't deserve it.

Sometimes the overall accident or incident includes a few minutes but in our head, it turns 100x more horrible. Don't become the victim, instead, sort it out by talking about it with a friend or any trustworthy person. Loneliness is the intensifier of guilt because it doesn’t allow any other’s perspective

Even if you have done something terrible, it doesn't mean you should punish yourself now. No one is perfect. It’s vital to learn from your mistake and commit yourself that you will not do it again.

Focus On What You Can Do Now

If you will waste the moment, the thing will get worse and worse and you will again feel guilty about this.

No one is perfect, we all make mistakes in every phase of our life and feel guilty later on, after realizing our mistake. The key is to realize your mistakes and learn from them. Don’t get engaged in self-blame. That’s life.

If you are in the same situation and unable to treat your guilt at your own, seek advice from an expert. A counsellor or therapist will determine the root cause of your guilt and treat it accordingly. 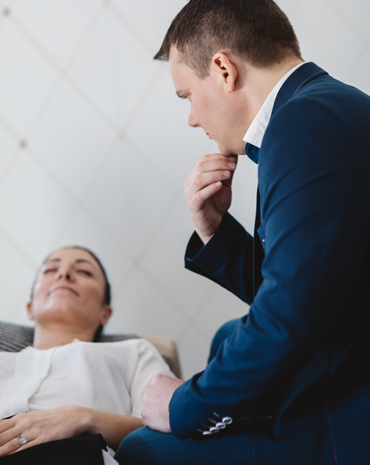 Hypnosis is a natural state of selective, focused attention, and, even though it is 100% natural and normal, it remains one of the most fascinating phenomena of the human mind. Our ability to enter this unique state of consciousness opens the door to countless possibilities for healing, self-exploration and change.

Chris Hughes has over 10 years practicing as a clinical hypnotherapist providing hypnosis based treatment in London and Oxfordshire. Chris is validated by the General Hypnotherapy Standards Council. This council assess the training of all their members to ensure they have the correct training. Chris is also a senior member of the General Hypnotherapy Register which is currently the largest professional registering organisation for practicing hypnotherapists in the UK.